Today in “Headlines we don’t need to edit”

History. A subject The Sun thinks we are unfamiliar with, and what this headline will surely go down in.

C’mon, Daily Mail. American spelling is one thing, but…

How to wash your hands properly

Thank Goodness for The Guardian. If it hadn’t been for this article, I would still have been cleaning my hands with elephant dung. Turns out soap and water is the way to go.

FPR Comment: Our stance on Climate Change v The Sun

Here at FrontPageRage, we prefer not to take sides, politically speaking. It doesn’t matter whether a paper is Lefty, Righty, Wrongy, Wonky – we praise the good, and call out the bad. That means we can’t take sides on things like Brexit, which party should be in power, Scottish Independence, or whether it should be acceptable to put pineapple on pizza. To paraphrase Groundskeeper Willie: we hesitate to lend our support to either side; be it the right one, or the obviously wrong one. This being said, some issues are so important that remaining on the fence would be akin to permanently impaling ourselves on it, and Climate Change is one of those issues. The planet is suffering irreparable damage, and if we do not act swiftly and decisively, there will be a climatic shift of irreversible catastrophic proportions. That’s just a fact. The “debate” is over. And if you are one of those people who doesn’t know why that statement in bold above is true: You’re not being shut down; you are still allowed to ask questions – just get someone who DOES know the answers to your questions to explain it to you. Don’t bring your questions to the political stage like they’re equally valid.

This is why we take issue with the terrible coverage regarding Climate Change in The Sun. Let’s start with their most recent “gotcha” headline; Ladies and Gentlemen of the Jury: Exhibit A:

There are several ways that this headline can be improved. (A couple of suggestions were from Grammarly, not from me). First of all, can The Sun please inform us which Airline Company is offering flights to the Moon? ‘Cause I’m researching the heck outta that. As long as the Return Flight doesn’t leave without me, and I’m not left stranded in the Van Allen belt expected to go the rest of the way via replacement space bus, I shall put in a note of interest. Judging by how far you have to fly just to get air miles, the sky should be black with smoke by now. Hey, don’t look at me like that. I’m not the one that wrote a headline that could easily be interpreted that way. Alas no; what they actually mean is that in total, Sadiq Khan PLUS staff have travelled a number of miles by air that comes to a figure higher than the distance in miles to the Moon. Sadiq Khan personally has only done almost 32000 of those miles. So again, the headline is misleading. That’s just for starters.

The Sun helpfully provides a map of where the Mayor of London (or maybe just his aides, who are being counted for some reason) has flown to – just in case their readers don’t know where Montreal, New York, Austin, Berlin, Davos and Mumbai are. Which brings me to the main question I wish to ask The Sun about this: How would they like him to travel to those places? According to my right-hand lady, who is an expert on almost all things travel, it IS possible to sail from London to Montreal, but it would cost about 3 times as much and would take TWO WEEKS. I have a hunch that the good people of London would prefer that he take the option that involves spending less of their money, and less time out of his office. After all, it is acknowledged later in the article that he was on official business. The right wing loves to use the non-sequitur that if you care about the environment and the climate crisis, you are not allowed to use aeroplanes. According to The Sun, Sadiq Khan is a hypocrite. Let’s not beat about the bush with “critics say”. THEY say. A Tory that we’ve never heard of has said that the Mayor is “open to the charge of” hypocrisy.

A discussion about whether or not the Mayor of London should be visiting these places in the first place is possibly one worth having. But that’s not the angle that The Sun is taking. They want to brand him a hypocrite for the sheer fact he was on a plane. No matter what your view on Climate Change, it is a simple fact that the planet is sufficiently large that air travel is the only practical means of getting between certain places. It is possible to simultaneously accept and resent this fact. I don’t think Rangers should be playing in the SPFL, but I still make money betting on them to win. Am I a hypocrite, or am I just playing the cards I have been dealt? Sadiq Khan did not commission the flights. They were commercial flights that would still have taken off and landed whether he got on them or not. He was not personally contributing to the problem. The Sun throws statistics around like there’s no tomorrow; quoting how long it would take a forest to offset the carbon dioxide caused by that much plane travel, and the fact the travel is 30 times’ that of the average Brit. But Sadiq Khan is not the average Brit – he’s the fricking Mayor of London. I’m not surprised that he takes more air flights than me for the same reason I’m not surprised that a taxi driver spends more time in petrol stations than I do.

But hey-ho; The Sun wants to talk about hypocrisy, so let’s talk about hypocrisy, shall we? Is it not hypocritical to dismiss the case being put forward by Extinction Rebellion, while lauding the very record temperatures that are a by-product of what Extinction Rebellion are warning us about? This, we reported a couple of weeks ago. Furthermore, I think it is hypocritical to accuse the Green Party of ignoring science on fracking while ignoring science on Climate Change. We have 12 years left to save the planet. Say what you like about Extinction Rebellion, but at least they are taking that seriously. To say that you can’t take them seriously because they are writing from prison, or dismiss their demands as ridiculous, is to NOT take the science seriously. There’s no middle ground here. As a National Newspaper, if you believed that report, you would be backing Extinction Rebellion to the hilt and you’d be putting it on the front page on a daily basis. But The Sun’s lead article today, if memory serves, was what a bunch of celebrities were wearing at the Met Gala. Maybe I’m the odd one out here, but I am more interested in leaving the planet in a habitable state for generations to come than what is being worn over a pair of breasts that will take 450 years to biodegrade.

Our position on Climate Change is this: Climate Change is real, and while we believe it is human-made, the more pertinent question is whether it can be human-unmade. We believe (or we hope) that something can be done about it, but it does require decisive action and that action may be an inconvenience to us. As for The Sun, they may have accepted the writing on the wall when it comes to Climate Change, but their stance seems to be that the world is only worth saving if it can be done quietly, and without bothering anyone. If we want to have a decent quality of life 20 years from now, we’ve got to be prepared to make more effort and spend more time doing it than it takes to file our rubbish in the correct bin.

Fun in The Sun 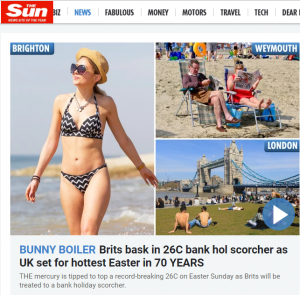 I wonder why Extinction Rebellion felt the need to protest?

TODAY’S LEAD STORY IN THE SUN:

LET’S TALK ABOUT A KID WHO MAY BE RELATED TO AN APPARENT CELEBRITY BECAUSE NOTHING IMPORTANT IS GOING ON IN THE WORLD RIGHT NOW.